At Anime USA 2010, there were many adventures to be had involving Hetalia Cosplay between myself and several friends. The first involved great personal embarrassment on my behalf and the other (which will be shared at a later date; say, in a week or so) did not. Needless to say the first one involved me as Austria getting put into my Hungary's maid dress for our own perverse amusement.

Warning: this is a very image heavy cut (big picture files, too. My apologies;; ), but it's all work safe. =D

I don't speak japanese,so maybe i wrong,but here the link to see this covers of axis and allied:

My room is like an endless black hole for doujinshi. I have no idea how I manage to find stuff to sell every single bloody time I try to think of a way to re-arrange my books. orz

Title: Not Quite What I Had Planned
Author: crescit eundo/glory_of_hera - c'est moi!
Character(s) or Pairing(s): Francis, Antonio, ~mystery salesgirl~, OC!attorney, OC!baby, Seychelles, mentions of Gilbert.
Rating: T
Warnings: The word 'breast', Francis is crying, he procreated Gilbert's in a wheelchair, and Antonio saves the day.
Summary:Everything in Francis' life, thus far, has been a failure: medical school, publishing the cookbook he spent three years piecing together, his pole dancing classes, the job at Bed, Bath and Beyond. So now, having adopted the baby he didn't know he fathered and running on a beautiful girls' ultimatum to win her heart in three months, he'll discover the meaning of family, success, and the real sacrifices you have to make for the ones you love.

“-and so then I said to him, that’s not food! That’s a pile of smelly rocks! So then I got thrown out of the restaurant- hey, Francis, you listening?” 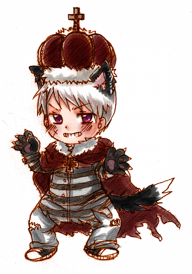 And this time, I gave some discounts for my art commissions for the Winter Season because I'm free now! /o/

Gradual De-Anon from the Kink Meme.

People have been asking about Finland and Poland, sooo, here they are! I like Poland and France would enjoy messing with people and Finland would be the awkward, shy, cute merman ^_^ I wanted to practice water and stuff, so I decided to do this picture. Also, I felt guilty for not having any new art recently, and especially with the Peter Pan/Hetalia series, so I wanted to get you something ^_^

First short chapter of a fill for the kink meme. Please enjoy! ^^

Hello there! I was wondering if anyone would like a free picture sent to them?

**We only allow you to WATCH the community.

Summary: Norway wakes up one day and finds out that nobody remembers who Denmark is, and the history books are against him. Norway searches for the truth and fights to show that he is, in fact, sane...

("Why? You hate direct sunlight.")

This time it's going to be a duel event. We have two events (one holiday related, and one none holiday) planned for the masses. Anyone and everyone is welcome to come.

It's time for our seasonal Hetalia meetup! This time, we will be celebrating the holidays with festive activities, games, and more!

Okay, many could have already heard that Lovino isn't an Italian name, at best it's an Italian surname.
In the belief it could have been an Italian name in the past and that was why it was used for Romano, I've researched about it on all the webs and books about names I could find.
All I was able to find out was that 'Lovinum' (derived by a Medieval variation of a Latin word meaning 'small wolf') had been used as a city name and 'Lovinus' (meaning 'Man from Lovinum') had been used as nickname for a painter. Since it wouldn't be the first time people get their name from the name of a city, I thought it was possible in the past people used it as a name also and I stopped here.

In this discussion however, people poined out that they had met Lovinos out of Italy and that, on English webs, is also reported the existence of the name 'Lovina' (while it's harder to track the name 'Lovino' down, unless they mention it as male form of Lovina), with the meaning of 'mother of Romans'.

Out of curiosity I checked this source.
Lovino/Lovina are English variants of Lavinio/Lavinia, which are Italian names of Etruscan origins.
The Etruscan meaning got lost, the latin meaning is 'person who comes from Lavinium'.
Lavinium (which has disappeared by now and was in the area of Pomezia) was the city founded by Aeneas and named after the woman he married. Since, according to the myth, Lavinia and Aeneas are the ones who gave birth to the ancestors of the first king of Rome, Romolus and his brother Remus but also of Julius Caesar and Augustus, you can stretch its meaning to 'mother of the Romans'.
Now... Lavinia and Lavinio (celebrated November the 1st because there's not a saint with either of the names) are Italians names but, even if still used, not very popular.
In Italian webs and books there's no mention they have/had as variants Lovino/Lovina (which, as far as I know, aren't used in Italy at all), at best we gets as possible Italian variants Lavino/Lavina (which are mentioned in Italian books/webs about names but seem to be used even less than Lavinio/Lavinia). It's possible that those variants fell out of use or, more likely, Lovino/Lovina are variants used by foreigners only.

Still, that's the best explanation about why Himaruya picked up the name Lovino so far.
It's derivated by a name with clear Italian origins, with an assumed meaning that is very interesting and fitting. It also might have ended up on a list of names he might have checked and he might have exchanged it for a name used in Italy.

So, as of now, Lovino is still not an Italian name, just the foreign version of an Italian one but, well, at least it isn't a name he made up or a name with no connection whatsoever to Italy.

Anyone else has suggestions?

PS: I found more info about Lovina since it seems more popular than Lovino. The girl name Lovina is used mostly in English and, in English, should be pronounced as Lahviynah (L as in "lee (L.IY)"; AH as in "hut (HH.AH.T)"; V as in "vee (V.IY)"; IY as in "eat (IY.T)"; N as in "knee (N.IY)"; AH as in "hut (HH.AH.T)"). It is of Latin origin. Lovina is a form of the English, German, and Italian name Lavinia.
Lovina is rare as a baby girl name. At the peak of its usage in 1903, 0.006% of baby girls were named Lovina. It had a ranking of #886 then. The baby name has dropped in popularity since then, and is currently used on a very modest scale. Out of all girl names in its family, Lovina was nevertheless the most widely used in 2009.
The following are English derivates for the name Lovina: Lavena, Lavenah, Lavania, Lavaniah, Lavenia, Laveniah, Laviniah, Lavinie, Lavyna, Lavynah, Lavyne, Lavyni, Lavynia, Lavyniah, Lavyny, Lavynya, Lavynyah, Levenia, Leveniah, Levina, Levinia, Leviniah, Livinia, Liviniah, Louvenia, Louvinia, Louviniah, Lovinah, Lovinia, Loviniah, Lovynia, Lovyniah, Luvena, Luvenia, Luvina, Luvinia and Vinnie.
Warning: None of the overmentioned derivated is considered an Italian name.
( Collapse )
( Collapse )

Warnings: uh, cross-dressing. And some Russia x Prussia. And please don't kill me.

(Because I can't stop giggling over 'Julchen'.)

here at my page

Title: Twelve Days of Aussie Christmas, Chapter 1
Author: Me on my artsy account,

chocolate_oxide
Character(s) or Pairing(s): Australia, Canada, America briefly
Rating: G
Warnings: None
Summary: You haven't really had Christmas until you've had it in the pool in 35 degree weather.

Breathe your life into me by ~Erdbeerprinz on deviantART

If this isn't allowed, then mods can delete this!

I've been looking for the complete set on the One Coin Figurines (Series 2) and so far I haven't had any luck finding a set that's in stock. Is there any website or any one who is selling all the figurines? If so, do they ship to Australia? I'll pay any price, provided that it isn't something overly ridiculous ($150 AUS is my limit).

I'd love to purchase them as soon as possible, but I don't mind waiting for them to come back in stock if there's absolutely no way for me to buy them at the moment.

Title: The Art of Fading Away

Characters: Austria, Prussia.  Maybe Austria/Prussia if you have your slash goggles on.

Summary: “I just…don’t understand why I’m here.  If there’s nothing left for me, why not let me go?”

“Maybe you’re not quite finished yet.  And maybe…maybe it’s because there are those who would miss you if you suddenly weren’t around.”

Hi! We're trying to determine how many people will be willing to attend a panel by The iammatthewian Project at Anime North 2011 in Toronto.It would help us a lot if you guys attending AN next year would answer (and spread the link).

Will you attend an IAMP panel at Anime North 2011?

This is who we are:
The iammatthewian Project