Since it's already February 14th for me and I'll probably be too busy to post this much later, here you go:

Click on the link for more! Also there's some Russia x Prussia retardedness there if you squint.

Title: Valentine
Author: rhapsodyoftales
Rating: PG
Characters/pairing: England, France, other nations.
Warning:  francis without beard,  unstable sketch and lines.
Summary: So..this is a fruk valentine strip, as you can see it's a sketch and I don't know..maybe it's too sappy. but..hope you like it :) There isn't any bubble text, so you can have your own interpretation though that the storyline is already obvious.

Title: Canada Abandons the Monarchy
Author: Original fancomic by Starstray, based on a sketch by the same name by The Kids in the Hall, adapted by The iammatthewian Project
Rating: G
Character(s)/Pairing(s): Canada, England, America, France

This is what happens when Canada "announces" that he is leaving the British monarchy and a bottle  (or three) of gin later...

Himaruya updated his blog with a new character,but maybe not from hetalia.

Happy Valentine's Day everyone <3
I bring you two fanfics

Title: Would you like to be my valentine?
Author: Moi
Characters/Pairings: Asa/Kiku
Rating: PG
Warning: None

Title: One Day in the Life of Alfred F. Jones
Author:

slashy_lady
Rating: PG13
Character(s)/Pairing(s): Arthur and Alfred, with appearance from Elizaveta and Francis/AlfredxArthur
Word Count: 4208
Disclaimer: The characters involved in this story do not belong to me, nor do they have any connection to real nation(s). No infringement intended.
Warning: This fic is not beta-ed and done in a rush so if you find any error in it, beg pardon (and notify me?).
Some Kind of Summary: The life of Alfred F. Jones, supermodel, was spectacular. But then he met Arthur Kirkland--his idol, his hero, his dream guy--and his life became perfect.
Note: Written for

usxuk's 2011 Special Relationship Sweethearts, Day 5 - Across the Universe. And because

hakuku's art HERE is really inspiring (the last picture, oh God!), I dedicate this to her.

It was the life of Alfred F. Jones.

The link will bring you to my writing journal; cross-posted to

Summary: Happy Valentine's everyone! Just a Hetalia Day vid/tribute (aka epic slideshow of all the meet ups) while waiting for that flashmob compilation :D I made back during Christmas. I never got round to posting it so here it is~ on the day of hearts when we can all celebrate fandom love too :'3 Enjoy! O/

Hello! Well, I need everyone's help (if you can help). I am a high school student, and for one of my classes I am supposed to do a project. Well, I want to make a video containing Hetalia Goodness! Hetalia is entertaining and informative (especially the Japanese culture). Since we have to take history and most of students fall asleep in that class the moment the bell rings, so I thought I should introduce Hetalia to them. The problem is that most of the students in my class do not watch anime and Hetalia may not seem interesting to them because of that...but since anything that is funny is appealing (and Hetalia is hilarious) I think they might appreciate Hetalia (even though most of it is in Japanese). So. I am asking for you to tell me the funniest episodes or snippets you know (keep it to the school standard, which means no naked France or or...France molesting England...or anything with France, really xDD). Since most of students are studying American history, anything (funny) related to that would be awesome. But since all of the students have studied World History last year, anything (funny) will do. In addition, I was wondering what kind of a video would be a good idea? Should it have sections introducing the characters in the video (before the funny scene) or just a compilation without intros or anything special? Also, maybe someone around here has done a project like this and can show me examples?
Because Hetalia has rekindled my love for history, I would like to show it to others, and maybe it could help others to be interested in that subject as well, which, in turn, can raise global awareness for cultures (in some people at least. Like me...I closely study the French now xPPP). I look forward to reading your suggestions!


(Also, Mods if this is not allowed...I am sorry, but please keep it here! But if it is really irritating and against every fiber of this community, it can be deleted)

Everybody who suggested things, thank you very much! It was a lot of help. My focus has changed a bit though. Instead of "Gaiz, watch Hetalia because it's hilarious", I will show accurate, funny, and unoffensive clips that would show the events we learned about in an anime-esque way. I would also mention that the anime/manga does have inaccuracies (to those who might be interested in continuing on to watching/reading Hetalia). And I will definitely show it to my teachers first (for approval). Again, thank you very much for helping me!

Title: When The Last Bird Twitters
Pairings/Characters: France+England (as young nations)
Rating: PG/OT
Warnings: implications of non-con Rome(or Roman soldier, however you interpret it)/France, very short description of France taking this out on England through inappropriate touching (with clothes on)
Summary: France ruins England's grand plans to taunt the frog, but something is amiss. Terribly amiss. Originally done for the

( It was uncomfortable for England, standing there, so much taller now than France who had nearly rolled himself into a ball. He may not have fully understood what France was saying, he probably didn’t want to, but England wasn’t about to have France moping about when he was supposed to be in a good mood for England to spoil. )

Title: Valentine's Day Is For Pansies
Author: me
Characters/Pairings: Germany, Prussia; Germany/Prussia if you want to, brief appearances of Spain/Romano, and suggestions of France/England
Rating: PG-13 mainly because of language--because Prussia and Romano are in this story, k.
Summary: Gilbert's too cool for Valentine's Day, and is determined to prove it.

Title: Carols and Bells - A Doctor Who and Hetalia Crossover
Author/Artist: LegoBricked (sketchy333/myself)
Character(s): Arthur (and the Eleventh Doctor)
Rating: G
Warnings: None! Except for the lack of colors and some bad pencil work
Summary: Arthur meeting the Doctor (again) on a cold, winter day. (Links to the dA page). Cross posted from tumblr.

Title: A Question To The World
Author: Me
Warnings: fluffy bromance
Characters: England, Australia (mentioned America)
Summary: It's been over one hundred years now, and England doesn't understand why Australia isn't independent yet.

England doesn’t know how to feel about Australia anymore. Once, when he was his youngest child, his biggest embarrassment and worst-kept secret, England wanted nothing more than to drown the hyperactive thief in a barrel. It was easy to think such thoughts when well away from the child, but when faced with earnest green eyes and evil red ones, one kept ones thoughts to oneself. Especially after one had experienced the sharp claws belonging to said evil red eyes. England wasn’t sure what exactly was in the water of Australia, but when he found out what it was (which he would, god willing), he was going to congratulate it on managing to squeeze enough pure evil into a koala-shaped form, and then he was going to destroy it. And then he was going to destroy that evil bear, even though he wasn’t sure that it could actually die. Australia had carried the bear since England had first met him, and that was well over two hundred years ago, and the bear didn’t appear to have aged in any way. Perhaps he should throw it into a volcano, see if that worked, it usually worked when looking to destroy ancient, ageless evils.

At any rate, Australia was far too cute to kill in cold blood.

yuuago
Summary: The progression of a relationship over a number of years. Mostly centred around the 19th-century union. 18 tracks; 1.2 hours. 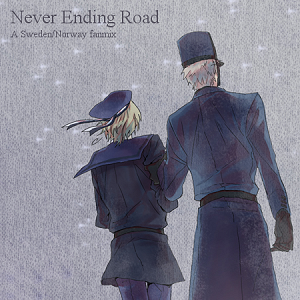 Located here at my journal.

ykyapril
Rating: PG
Characters: France, England
Summary: What's the one thing you have to do at the top of a Ferris Wheel?
Notes: so it's valentine's day and here's a quickie :) gosh i haven't written for so long orz 8| so this is the first of a drabble series based on the 30 kisses challenge on LJ which I may or may not continue lol

anyhow, please enjoy and have fun :)

( Well, it's not exactly a Ferris Wheel, but Francis supposes it will do. )

Summary: Prussia and Hungary are in London for a day trip.

( Today is blue and London is quaint and grey, the people still square and the leaves a smoky red as they fall on park grass and fountain tops. )

I did a couple of Valentines day pictures, a derpy doodle and a derpy cosplay picture.