God-Mods, please forgive me if this isn't allowed.

Once upon a time this poster opened a board known as Manor of Fate. We're still under construction, but the forum is near ready to open again after a very long Hiatus. However, before we open, we really need 1-3 members willing to play the MONSTER of the game. Since HetaOni's manor has warped time, more than one of these creatures is ideal. The persons who get to play get SLIGHT God-Modding abilities, seeing as the monster is evil, strong, and can't die, but more details will be given to those who are interested.

The people who take on the role of the Alien need to be able to turn out at least 1-3 posts a week. It isn't really a hard job, it only depends on how many threads you take on for yourself at once. But they would be greatly appreciated.

(Members who take on an alien can also take on a country if they wish, they are no restricted to only playing a monster).

Don't you miss the days where friends were made so easily? Where you made friends based on how they gave you the red caryon.
Here at blue star, children with different nationalities meet. They play and go to school together.

Watch them grow and deal with culture barriers as well as language. But more over watch how they have fun and how easily friends are made.

FINALLY!!! it took me 1 and a half month to draw this line art but it’s finally done!! D8 and I'm a little bit proud of it.. X3 I almost never draw.. :3 but I think this one came out pretty well for what I do normally :3 maahh.. I real drawer probably find a looooooooot of errors.. XD but I don't mind.. XD I'm happy with it.. XD I probably will colour it.. but it will take me another half year to do so XD ahaha XD that is why I wanted to upload the lineart XD

it’s China :3 because I luv him :3 and because this is a scene from a fanfiction I wrote a while ago :3 He is looking at the horizon where the english ships that dissappeared with hong kong on board and China is like really sad about it.. D8 the fiction is somewhere on my livejournal.. but I’ll just give you the link to my DA XD:: http://punkrockertjuhh.deviantart.com/gallery/#/d374y67

Himaruya said, in his previous post, that he plans a midnight update. It's midnight in Japan, now, so here it is! And there's more! 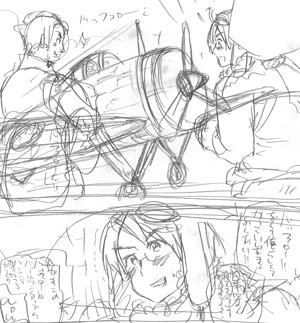 Here is an official preview.

This is the test mochi the one I will be adding to my America cosplay he is not for sale.. HOWEVER（ [∂]ω[∂] )
Mochi plushie commissions are now open. Character mochi's I have the materials for are Russia, America, Canada, and England tho due to the price of shipping and box sizes I can not put a hat on England( Collapse )

Still Plenty of Figures left and almost all the Rubber straps!
Click the pic for my sales journal~

Right! I've finished them both! Enjoy!

I just got a new phone the other day, and was excitedly searching up Hetalia mp3s to get on it. I entered "Katsuyuki Konishi" when trying to get some of the Hetalia songs done by him, and while most were "Hatafutte Parade"s and the character songs and MKCs, there was something in Japanese at the bottom. I clicked to preview it, and it turned out to be a track from something.
The title was this:

Does anyone know what it means? Or what it is?

( Collapse )
Title: Turn About
Rating: 15
Summary: Based off the Second Peace Treaty of Thorn, where the Duchy of Royal Prussia was surrendered to the Polish Kingdom. Poland takes what he was given, and he enjoys it. Can't say the same for Prussia.
Warnings: Non-explicit sex, angst, language, rusty writing.
Characters & Pairings: Lithuania, Poland/Prussia

( Is my America bias still there? )

mel_girl
Rating: T (contains swearing, etc)
Characters (in this chapter): South Italy/Romano, Prussia, North Italy, Germany and Spain
Pairings (for the fic): Eventual Prussia/Romano. Others hinted at include: Germany/Italy, Prussia/Hungary, America/Russia, Spain/Romano, France/Spain/Prussia, France/Romano, Germany/Romano, Spain/Belgium, Belarus/Russia, Estonia/Ukraine, Austria/Switzerland and more.
Genre: Drama, Supernatural, Romance, Humour and could be considered a parody.
Summary: Lovino Vargas desired a normal life, free of supernatural beings. Only it seems the more he desired normal, the less ‘normal’ he got. Because his brother’s boyfriend’s brother happens to be a total freak, who claims to be seeking out the extraordinary and that the world should revolve for him. Unfortunately for Lovino, the extraordinary is everywhere and even worse... the world really DOES revolve around Gilbert Beilschmidt... [based off the Haruhi Suzumiya series]

(( I couldn't deny that there was an appeal to the way Gilbert Beilschmidt viewed life. ))

Title: Curse of the Undead
Author:

osco_blue_fairy
Genre: Action/Adeventure, Romance, Humor
Pairings: USUK, Turkey/Greece, one-sided Turkey/UK
Rating: PG-15
Warnings: language, some disturbing (imho) imagery, blatant historical inaccuracy, character death (not main)
Summary: What harm ever came from reading a book?  Well, raising the dead and bringing about the apocalypse to name a few--Arthur knew he should have just stayed in the museum.  AU based off the 1999 film The Mummy.
Notes: This was done for and inspired by the marvelous

hakuku who did THIS gorgeous piece of art during the Sweethearts week.  Words utterly fail me for how awesome an artist she is and I wish I could give her more...but this is already quite long enough as it is.  And yes, I know the picture is actually based off the sequel but she said she liked the original more <33  Expect Part 2 up later this week!

gramarye1971
Character(s) or Pairing(s): Switzerland, Canada, Germany/Italy, implied France/England
Rating: U
Warnings: None.
Summary: The nations have lost their ability to communicate with each other in any language other than their official languages. Canada and Switzerland, as nations with multiple official languages, have been pressed into service as simultaneous translators for EU meetings. But how will they react when a desperate Italy begs for help to convey a message that he can no longer say on his own? (De-anon, with minor edits, from the kink meme, in response to the OP's request.)

( Collapse )
Hey there, comm~ Mods, you can delete this if it's not allowed...but guys, listen! Those ADORABLE deck of card designs that Himaruya did recently (where Germany is the King of Hearts, America is the King of Spades, etc.)...does anyone know where I could find a full-sized picture of all of them for reference? Besides the small picture posted in the details about the art book, I mean. That one's okay but it's way too itty-bitty. DX Thanks in advance!

For those who may not be sure what I'm talking about, this is the small image from the art book description (the chibis, not the ~amazing~ new uniform designs):