Title: Lying in that Sound, Tonight - part 14 (of 15)
Series: Axis Powers Hetalia
Characters: Arthur (England), Alfred (USA), major historical figures (and the occasional unnamed citizens and mentions of other nations)
Pairing: Eventual Arthur/Alfred
Rating: PG-13 overall (for language, violence, and war)
Warning: This is a WWII fic and deals with a lot of historical detail, most specifically the Blitz and the US build-up to entering the war. So general warnings for that. Note also that the opinions of characters are not necessarily those of the author's.
Summary: Before the victory of the allies, before the United States of America joined the war, before Lend-Lease, before everything — there were just two nations, two men, who just refused to meet halfway until it was forced upon them.
Summary for this chapter: The United States of America enters the war.
Time stamp: December of 1941.
Notes: Posting this a bit early. I'd also like to mention that this is in no way, shape, or form any kind of social commentary on the recent devastation of Japan and am in no way insinuating any kind of "moral justice" for the tragedies they face. Please remember that the thoughts of characters are not necessarily the thoughts of the writer. /disclaimer
Other installments:
01 | 02 | 03 | 04 | 05 | 06 | 07 | 08 | 09 | 10 | 11 | 12 | 13 | 14 | 15 No matter how hard each country tries to work towards peace, strife, dissonance, and war are inevitable.

In every nation is a small, irrepressible desire to dominate and rule; behind every treaty and agreement, an ulterior motive. Countries that were once powerful empires cannot deny their yearning for the days of old, while their colonies - those that have been repressed, abused, and forgotten - desire for power, acknowledgement, and glory.

Now, with insurrection in the Middle East, manipulation and combat in Asia, the emergence of an alliance set on changing the world order, and the discovery of a new source of oil, the world has been plunged into World War III. Friendships that were previously thought to be unbreakable have been shattered, while love is being found in the most unlikely - and most unfortunate - of places. Nations that were once enemies have become the closest of allies, though not even those with the gentlest smiles can be trusted.

Welcome to Hetalia Imperium, where the fate of the world rests in your hands. Noblesse oblige - let those with power use it responsibly.

We've still plenty of characters still open, but ones that our members would love to see are the Baltics, Austria, Hungary, Spain, Ukraine, the Asians, and Australia.  Plenty more, however, such as Greece and Turkey, are still open for the taking as well.

I learned about One-Coin Grande Hetalia figures today and have a very, very high interest in buying them. And by them, I mean all the ones available to buy~

Looking on different websites, I noticed that the only way to buy these figures is to buy them in 2 box sets with 8 figures in each. Each box costs around $65, from what I've seen. Adding on the cost of a figure not in those boxes, the price ends up being up at $146 not including shipping.

I understand that the figures are cute and everything, but for figures about 4.5 inches (11 cm) that can be kind of expensive, even if it IS 19 figures in all.

I was wondering if anybody out there had a website I could go to with box sets being sold for less than $65 each or if anybody is selling their own collections?

Title: "Al-Andalus"
Rating: PG-13 for spiritual discussion
Characters/Pairings: Turkey, Spain (more gen then pairing)
Summary: Turkey wonders how much Spain remembers from the time of Al-Andalus.
Notes: OMG Gen fic that has a strong basis in history? I was wondering when I'd be writing this again...

This month includes: A look inside Prussia's house, Which guy is right for you, CAPTALIA interview, the role of Prussia in fandom, a chat with Turkey and much more!

( *shakes hand* Luckily, the carpal tunnel is starting to wear off )

Title: Romano & the Spanish Armada
Artist: yo!
Genre: Drama/romance.
Rating: NC-17 in several places, but P-13 for violence in this chapter.
Characters: Romano, Spain, UK, Italy, Germany, France, and OCs including Portugal, Castilla, and Aragon
Summary: The manga in which Romano meets the Spanish Armada.
Note: Sorry that it's still in Japanese. The translations are in progress.

I've added a bunch more figures from both sets n__n I decided that I'm not as attached to them as I was before, and I need the money to pay for my college tests, classes, etc. ; u ;

Ship from US, will ship internationally c:

Female Austria by ~Frozen-Wing on deviantART

Comments and critiques are welcome ! <3

Look, everyone! A Hetalia shirt boys can purchase without bruising their masculinity!

Title: Eros
Genre: Fluff/Smut
Characters/Pairing(s): America (Alfred F. Jones), England (Arthur Kirkland), USUK
Rating: M
Warnings: Strong language, use of human names and sexual situations
Summary: Alfred and Arthur are fighting again. But this time it proves to be too much for Alfred to handle. He flees Arthur’s house and is let loose in London. When he does not return, Arthur gets worried and goes in search of him. It turns out that Arthur isn’t the only one who likes to drink. Sap/smexy times ensue.
Notes: De-anon from the Kink Meme! I’ve only waited a week since finishing this to post it… I hope that it’s not too soon?

Hello, I'm just wondering, does anyone know where I could find translations for the 'Picture index/Himurya's comments' section of the Arte Stella artbook? I've tried looking through this community and googling it too, but so far, no luck. If anyone can point me in the direction of translations I will be very grateful :3

Do YOU have an opinion on Hetalia that would make your flist kill you if you told anyone?
Do you hate the fandom sometimes but don't want to be the cause of an all-out fandom war? Well, we have the place for you!

Go to hetaliasecrets @ tumblr and submit your secret today! All posts are anonymous. This is similar to fandomsecrets, but restricted to Axis Powers Hetalia.

Mods, if this isn't allowed, feel free to delete this.

"In the heart of New York City, there is a reastaurant..." 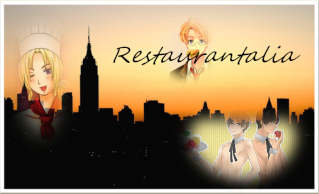 Drew a fan art of England in a Gakuen Hetalia uniform.

Please visit my DeviantART page of this and stop by at my gallery.. :D I only ship in the USA for right now, since it's my first time selling stuff...

Hetabook, a Facebook based Roleplaying group is in need of new RPers. We have been founded more than a year ago and lived great moments together as a close community. However, we lost many people during the past year and it is time to recruit new players !

Please delete if not allowed~

Hey everyone! First post here and just want to fill you in on a community page I just made for Prussia~
If you would like to join, please check it out ^-^

check out the awesomeness at : http://community.livejournal.com/prussianempire/

Title: The Kid
Author/Artist: MoyaKite
Character(s) or Pairing(s): Mainly Prussia, Germany, and Freddy (little kid!OC), but almost everyone could end up in here eventually. (In this chapter: Freddy and Romano, mainly; Canada, Germany, America, and Japan are also present.)
Rating: G (thus far)
Warnings: Fluff, discussions of mortality, potential for future character death
Summary: Simply put, Prussia goes backpacking across Europe and finds a kid. What sort of a dad would Prussia be, anyway?
Author's Notes: The original (which started on the kink meme) is here. I'm extremely fond of this story, so it's likely to continue as long as people keep showing interest. The more comments I get, the quicker I'll update. That's the reason that I'm updating tonight, anyway, despite it being the night before a HUGE presentation for my thesis. I love you all so much! <3

Please click the picture or the category link to go to the sales page :)
Here's my FEEDBACK page just so you know that it's safe to buy from me :D
Collapse