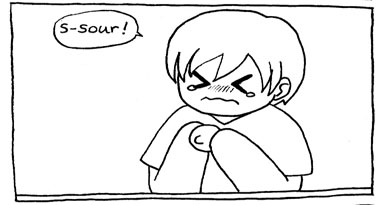 Title: Not just a fling 7/?
Rating/warnings:T for now,
Author: Me
Characters/ Pairings: UKUSUK:Main. Other pairings will appear. Prussia, Japan, England, America, and brief appearances of other characters
Summary: Alfred F. Jones is a student model who loves the attention his job gives him. What happens when a certain person in his new school not only doesn't fall for his charms, but finds him irritating as well? AU
Chapter title: A little bit of past revealed.
A horror movie. They were watching a goddamn horror movie.
previous chapters:
1 ( Collapse ) 3 4 5
6
FF.net

Here's another blog update, this time of Prussia.

The War was a while ago. It's capitalized because, for the newer generation especially, it is the war that changed the world. None of the previous ones matter anyways, who cared about the fight against tyranny, civil wars, slavery battles, when everything was gray and ash and death? Nearly 40 years had passed since the weapons dropped, decimating everything. Ramshackle towns have built up since, small villages filled with hovels and half destroyed buildings, like a kid who decided to crush a lesson on ancient villages with a town crushed by a giant robot fight. Some of them survive, manage to function on some warped form of government as the inhabitants cling to each other and shun those who travel in caravans.

Caravans... They are like the gypsies of the current world, from children to pre-War professionals, all hauling wagons behind the cars they could salvage and making a giant protective circle at night. Watch guards and a large fire with stories to ease the peoples mind as those on duty patrol and quickly kill off any threat from ghouls to the monstrosities that used to be animals.

Meat /is/ meat though... And food is scarce, water even more so. What you find /must/ be boiled, there is no cure for radiation sickness nowadays besides prayers to a God barely any remember, or believe in anymore. What sort of Heavenly Father would allow such a thing to happen after all?


Though technically started with so few members we're going at less than a snail's pace right now and some rules, like activity, aren't really being enforced until we get out member count up so people have others to interact with.

If you are interested please click on the banner at the top as it doubles as a link! We accept anyone from canon to ancients to OC nations! (no states, and we do expect there to be a bit of stereotyping on how you portray the OC to link them as their Nation.)

Pardon the bugs as it is out first time using and operating a forum @w@ I, as the main coder, hope to get everything fixed and ready ASAP!

I have something I want to buy.
Unfortunately, I'm broke but I offer three doujins in exchange for one charm!
I'm searching for them for ages (and this is my third try with this post) so please if you have one of these, read here! (; A ; )

hey everyone!  i'm selling tons of doujin and random goods for cheap over at hetalia_sell!  thank you for looking! :D

The Chicago-area anime convention Anime Central announced on Tuesday that it will host Bob Shirohata and Mika Nomura, the director and producer, respectively, of the television anime series Hetalia - Axis Powers. Anime Central will take place from May 20 to 22 in Rosemont, Illinois. The anime adapts Kaz Himaruya's manga series of the same name. Shirohata helmed Diamond Daydreams, Gravitation, and Let's Dance With Papa. Nomura produced the entire When They Cry anime franchise and Umineko no Naku Koro ni, as well as the current television series Steins;Gate.

Terribly sorry for spamming the comm, but I need an honest opinion. I'm trying to create a Germania cosplay. However, I don't really know what material I should use for the torso-armor thing he's got going on. It's armor right? Or is it leather? The color varies from picture to picture so I can never tell.


For reference here's a picture

( Collapse )Has anyone around here ever cosplayed Germania?

Title: Twisted
Author/Artist: Me!
Character(s) or Pairing(s): America, Canada, England
Rating: M for safety. And suicide.
Warnings: Suicide.
Disclaimer: I own nothing.
Summary: After the financial gang bang happened and burdened by the memories America chooses to commit suicide in order to escape the pain. Tormented by guilt England prepares a spell to bring him back. Only he had no desire to come back and now that he is, he wants only revenge.

tactician
Characters/Pairings: Ancient Greece, Athena, Alexander the Great, Greece
Rating: PG
Warnings: Possible OOC?
Summary: It is his inheritance. It is the greatest, grandest temple in the world, and it will shield her son in the days when she is gone.

"There is nothing unreachable to those who have courage."

Title: In the Gray
Author/Artist: Artemis
Character(s) or Pairing(s): France, Germany, implied Fra/Ger or not depending on your bias ;)
Rating: PG-13
Warnings: human names used
Summary: The war is over, but for Francis and Ludwig nothing is well.
Notes: Polished kink meme de-anon for the prompt I warn ahead of time, this doesn't make too much sense. Anyway, for some reason I crave France/Germany fic based on the church scene from BtVS, "Beneath You": http://www.vbox7.com/play:182b1bb9. Who's who is up to you; though it probably makes more sense to have Spike!Germany and Buffy!France, if you can make it work the other way around all the power to you. :)

In war-ravaged Berlin, abuzz with Russian soldiers drunk on victory...