Hello there! I see a lot of fanfiction posted to this community, so I hope other fellow writers can offer their opinions on a few issues I've been turning over in my head.

I am planning and preparing a historical fic concerning the full history of Hong Kong. Recently my research has been mostly about WWII thanks to the book I'm reading, so the concept of nations during battle made me come up with a few questions:

1) The comics and anime clearly show that nations do participate in battle alongside their soldiers. I'm definitely showing this by having Japan and Canada fighting, but since I have Hong Kong "human aged" at roughly 10-12 years old at this point, do you consider it fair to have him participate in the troops as well? I thought about it, but it doesn't seem right for some reason. Right now I have him at the side of the governor and Commander of the HK Garrison, in the middle of all the orders and reports.

The next two questions are more about Hetalia fanfiction in general.

2) I do try to stick to nation-names instead of human-names when dealing with them in a historical or canon way, but trying to write war councils and military personnel discussing strategy makes it slightly awkward. When the name of a place could either mean the nation-person OR actual physical boundaries of the colony, it gets slightly confusing. What is your stance on this? Should the humans continue to refer to nations via nation-name? Speaking of which, Hong Kong doesn't even have an official one so I'm leaning towards the former right now...

3) ENGLAND, or BRITAIN?? Which one to use?? In my outlines, I've been using "Britain," though the main British battalion at Hong Kong were the Royal Scots.

I hope this is okay for me to post on this community. If not, I'll remove it. Thank you!

Title: The Tale of Psyche and Eros Redux – Act 3
Series:  Axis Powers Hetalia
Author: me
Pairing/Character(s): Greece/Japan, France, Liechtenstein, America, Spain and South Italy
Rating:  PG-13
Genre: Fantasy-AU, romance, adventure, humour
Warning: probable OOCness, slight crack and a mishmash of all your favourite mythology/folk-tales thrown together
Summary: In which Francis savours the taste of revenge and Kiku braves through trials of fire
Note: This took awhile but here it is. Hope you guys enjoy it :3

“Very well. I shall then make trial of your housewifery.”

I found some spare time and decided to make good use of it by drawing one of my favorite European countries! Hope you guys like it!

Title: Just So Darn Cute
Fandom: Axis Powers Hetalia
Pairing(s)/Characters: Alfred(America)/Victoria(Fem!Britain), Francis(France)
Rating: PG
Warning: AU, cursing
Summary:  It's not the perfections that cause Alfred to fall in love with Victoria.
Notes: Kink meme de-anon, from this prompt: Brad Paisley -Little Moments. Man, this song gives you so much to work with! Fem!England’s foibles and America finding it absolutely endearing and adorable.
Link to video: http://www.youtube.com/watch?v=vBErCVNP6rM

I know she's not perfect,
But she tries so hard for me,
And I thank God that she isn't
'cause how boring would that be?


Title: I Can't Stop Loving You
Fandom: Axis Powers Hetalia
Pairing(s)/Characters: Alfred(America)/Arthur(Britain), ensemble cast
Rating: PG at the start, a hard R in later chapters
Warning: AU, a few curse words, angst, (a later chapter will contain (mutual) dubcon)
Summary:  When Arthur was 19 he bought a laptop, shaped as a toddler which he named Alfred. Six years later, Alfred breaks down. Rather than lose his little boy, he has Alfred's data and AI transferred into an adult unit. Alfred's new body complicates their relationship with tension Arthur isn’t prepared for.
Notes: Kink meme de-anon, fill is still on going you can read the first (unedited) half here and the second here; beta read by the awesome

hotbabysitter.
Chapter Three: In Between

I'm coming home from college, and need to clear my things out! I have three doujin today that are priced to move. Title: 怖い時くっついていたくなるのはよくある話 (A common story of wanting to cling onto someone when scared)
Artist: どっせい
Translator: me
Pairing: AmexCan (cameo by France)
Rating: PG-13
Pages: 1
Original: Here
Download: Mediafire
Note: I really need to stop procrastinating. It's technically *dokun* instead of *doki* but I figured people would find *doki* easier to understand. *dokun* is just a more intense version of *doki* anyhow.

Hi all, I need help!

For LJ members who know me, you should know that I make regular scans of Anime Magazines like Animage, Animedia, Pash and sometimes Newtype.

Last month, I made a reservation of Animage and Animedia (May 2011 issue) with my local Kinokuniya but I completely forgot about it and bought it off the shelves since they are available on the shelves. Just now, a staff from Kinokuniya called me to inform me that if I do not collect my reservations by the end of this week (30th May 2011), I'll be blacklisted and they won't take my future reservations anymore. Though I explained what happened to them, they are firm to stick to their policies. (sigh) (v.v)

I already own copies of Animage and Animedia (May 2011 issue) so it's a waste of money for me to buy extra copies.

Since I frequent Kinokuniya for Japanese books/manga/magazines, I don't wish to be blacklisted. I'll be getting the magazines this weekend and I hope some kind soul will buy them from me. I'll sell both for 20 USD + shipping/handling fees, which is less than half of the price I'm going to pay them for.

There are many attractive gifts which came along with the magazines. You can find the scans here for reference.

You can find my sales feedback here (100% positive).

Hope you can help me~ 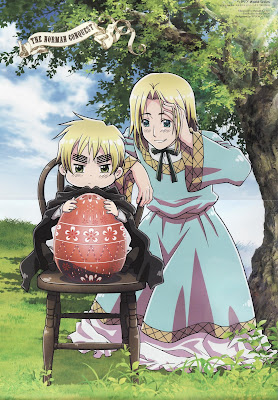 a quote of the Tokyopop's statement on unfinished titles.

"It's been a while since we've commented on the status of all the titles that are left unfinished or unpublished. Just so you know, we're still reading all of your comments and want to explain a few things".

if this  isn't allowed in this community, mods are free to delete this post.

Title: Adoption
Author/Artist: Me!
Character(s) or Pairing(s): Russia, America, RussiaxAmerica, FemGermany, Canada, FemFrance, England, Belarus, Ukraine
Rating: T
Warnings: None.
Disclaimer: I own nothing.
Summary: When Alfred and Ivan are finally approved to adopt a child they get a fourteen year old girl from Germany who has been mute ever since she was six years old. FemGermany.

Title: [invincible]
Characters: England, fem!England, fem!Japan, fem!America, Estonia, Germany, Prussia, fem!Canada
Rating: T
Warnings: AU, zombies, nyotalia and human names
Summary: An explosion occurs at the local "research plant", and after a convoluted chain of events, Arthur, Victoria and Sakura find themselves scrambling to get out of town before they fall to the zombie virus.