Summary: Germany is suddenly cursed with the plight of large, overbearing breasts (among other features) that would force him to take on the alias, Lucia. Numerous other problems would subsequently follow as a certain Italian boy fell deeper in love with his female guise. But could it be that she was also falling in love with that same boy? Her emotions are left in quite a frenzy, as are her hormones.

Notes: title translates to "Spaghetti and Sausages" in German. evident genderswitching, not really genderbending -- Germany is still the same character-wise -- he just transformed into a female, is all. also, my first HETALIA-based fic, so i'm pretty stoked about it (:
FF.net
Chapter 1
Chapter 2
( Collapse )

Summary:Being tangled in the mess of Arthur's ex-boyfriend and Ivan's blackmailing, Kiku finds himself doubting his own heart in loving another after his possessiveness changed everything in the past. What will he do when Alfred asks for Arthur to come back?

Kiku was typing in a hurry when a pair of hands suddenly covered his eyes. He flinched at their cold temperature and he reached up to remove them.

"Guess who… guess who…!" an Italian accent asked in an excited tone. Kiku sighed.

Hi everyone! I'm liquidating my doujinshi collection this time. This is the last of almost everything I own. :)

Merchandise sales can be found at

And without further ado: 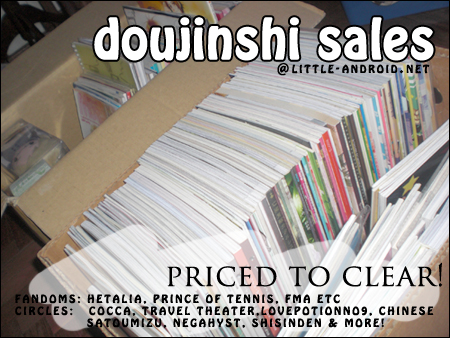 HETALIA DOUJINSHI; BOTH CHINESE AND JAPANESE.
Because this is the last of my collection, it is painfully circle and character focused. :)
Please read all information on the website before ordering!

ETA:Shipping is NOT cheap from Singapore, especially once out of the Asian region. If you are buying about 3-5 doujinshi please be prepared to pay about S$13-S$20. Everything is SOLELY by weight so I do not have the liberty to offer flat rate shipping. I will give you the best price that I can get from the post office though.

If you buy >1kg (2.2lbs) of doujinshi, shipping becomes a flat rate for every 500g added on. :) Rates will be posted on the website.

The Animal Preserve Hetalia & veterinary school is a world-famous facility known for its specific breeding programs and its collection of rare animals. Therefore the facility only accepts the best workers & students, training them in its very own school. The zoo is also known for being one of the largest to exist, covering huge tracks of land letting the animals live in the best possible environment with hiding places for when the stare of visitors becomes too pressuring for them.

Of course a zoo couldn't work by itself, And the current zookeepers are getting old and close to retirement. It is required the zoo get a new set of staff and students to help it continue to function well.

The Animal Preserve Hetalia is waiting for you, animal lovers, to fulfill our soon to be opened post or join our school.

sobdasha
Rating: G
Characters: Spain, S. Italy
Pairings: not really
Warnings: fic that is too long for a literal drabble and too short for anything else
Words: 183
Summary: It's WWII and Spain has tissue paper instead of guns.

Follow the fake cut to my writing journal or read at FFnet if you prefer:

Title: A Quarter Of

Summary: Whenever England is in London, he lives out a private life hidden from the other nations. He works at an old-fashioned sweet shop. One day America stumbles onto his secret.

Part 3 (the final part) is here

title: and we have just one world; but we live in different ones.
author:


( ❝ We have fought in the past and we have done terrible things to one another, but I have, and always will consider you my brother. ❞ )

hollyrose_hime
Character(s) or Pairing(s): Prussia/England
Rating: T
Warnings: None?
Summary: He doesn’t know how long he has been there. Time seems to have come to a standstill amongst the nothingness that stretches to infinity in all directions, though, he muses, it’s entirely possible that it has just accelerated and left him behind. Oneshot. Part of the Music Meme, based on Cosmic Love by Florence and the Machine

Title: Five Times Captain Kirkland Refused to Believe His Eyes and the One Time He Had No Choice - #1 Trick of the Light
Author/Artist:

hollyrose_hime
Character(s) or Pairing(s): Prussia/England
Rating: T
Warnings: None?
Summary: It had been a productive night for Captain Kirkland and his band of pirates; a successful raid had left the whole ship giddy with accomplishment long before the rum had been brought out. AU Multipart.

hollyrose_hime
Character(s) or Pairing(s): Prussia/England
Rating: T
Warnings: None?
Summary: “Really, I have no idea how you managed to get into a bet with two ten year olds about headstands of all things.” “Actually, I think you’ll find we started out with handstands. They upped the stakes.” Oneshot. Part of the Music Meme, based on Bruises by Chairlift.

din_84
Pairing: general, no specific pairing, all nations
Warnings: Some songs are angsty and/or talk about death. References to war crimes and all its horrors, mentions of military violence against people etc. Politics, history.
Summary: A general FST for hetalia set in the 1945-2010 timeline. Lots of love and thought was put into it.

I also re-uploaded my other FST :

Title: Wait. What?
Author/Artist: Me
Character(s): Segorga and Sealand (Barter and me)
Rating: G
Warnings: None
Summary: Segorba says something that makes Seland go "Wait. What?"

Wait What by ~lonym82 on deviantART

Characters: America and Germany (plus Obama and Merkel)
Rating:G
Warning: Politically minded and the pic is too large, so you'll have to click it twice.
Summary:No, no, this isn't a crack pairing, just a tribute to the German influence on American culture. Enjoy! ( Collapse )

Hey~ It's been such a long time since I last posted my work here for you ;))
Now I've just made something recently and I really want to share xD

and you can go here for downloading~

Once upon a time, before countries existed in Great Europa and beyond, there was a army and a kingdom. While in different areas, it's debated if the army and kingdom were good and kind, or ruthless and cruel. However this army controlled the whole world, with their flawless plans and the weapons they wielded. Magical weapons, that were said to be the best ever crafted.

However, one day this Army vanished.

In it's stead, nations, countries, and empires, came into being. Many fought for the title and the power. The weapons of the ancients were used frequently. The only empire who grew close enough to the top, before failing, was the great Roman Empire.

Today, those Empires, and once great countries have been sedated. These people are now the nations and countries as the new way of the world. The Americas, once thought to be a myth, have joined the fray of Great Europa. Magic, the main component in this world, is used in many different ways. Many people have come to rely strictly on magic.

Magi-Technology, Rune-Magic, Body-Magic...everyone has something going for them. However the world is growing. And the itch for the new army is rising again. Small skirmishes have been growing. Many countries are once again, using the few legendary items that were left behind from the Great Army long ago. With the growing number of nations and political strife, nations are calling claim to what they can before everything breaks loose.

War is being whispered, and many people are clamoring for alliances that would give them a edge. The brand new Technology, and the Magi-Technology, everyone wants more. Fighting tooth and nail is how everything will start, but it's up to you for how it ends.

There have been fights, many people are dying, and no one knows what will happen when the spark finally ignites. Will it be the end of the world? Or will a nation come out on top? Many people have tried to create and form the Great Army and failed. Will someone succeed this time? Can anyone rule this broken world?

Steps into the past is a Hetalia human-based-magic using AU. The nations are leaders of their country. We are a brand new rp site, with a 200 word count, and a easy application. Many characters are open, and we allow OC's.