Title: Follow You Down
Character(s) or Pairing(s): US & UK
Rating: PG
Warnings: None
Summary: Not intended to necessarily be romantic, just bros being bros set to "Follow you Down" by Gin Blossoms.
( Collapse )

I've just made some Spainmano icons while going on vacation~ xD

First... They're making MORE pillows~ *A*
Only Russia so far, though. My wallet's already crying. 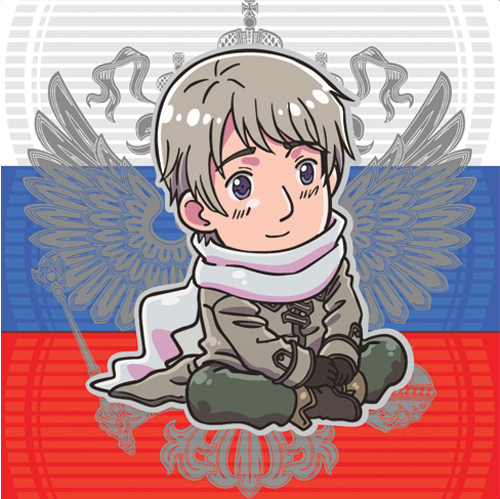 And... I haven't really been keeping up with other characters, so I'm confused. Looking at the last page shows there's only two new items, unless something's disappeared from the site, but.
I can't tell if it's the America wristband or the bunny phone charm.
Either way, current massive list's here for anyone who may've missed a couple things~

Summary: The Kirkland family had fallen from grace and now they scraped out a living with the rest of the lowest of the low. Alfred Jones, heir to the great Jones fortune, was staying with his brother in England and his biggest worry was dealing with an unrequited crush. Their two worlds brutally collide one sunny day in May. Victorian Era AU. Done for the period piece theme for the usxuk summer camp.

Title: Extraterrestrial
Character(s) or Pairing(s): RussiaxChina
Rating: PG13
Warnings: Not really.
Summary: An AMV of the pairing Rochu, with the song ET by Katy Perry, but without Kanye.
( Collapse )

Title: Love You Forever
Author: Me
Rating: Teen
Fan Fiction Type: Oneshot
Contains: Slight cursing and gore
Pairing: USUK
Summary: It's the end of the world and people have been infected by a virus that turns them into zombies. How will the virus impact Alfred and Arthur's relationship?
Note: Link below leads to Deviantart! Also posted on my journal here.

(Watch out for zombies!)

misskiramel
Genre: Adventure/Hurt/Comfort
Rating: PG-13
Characters/Pairings: Hungary/Prussia and maybe a little Hungary/Russia also features Lithuania/Toris, Latvia/Raivis, Estonia/Eduard von Bock, random North Korea OC, and mentions of Germany/Ludwig (more are likely to appear in latter chapters).
Warnings: Violence, Drama, gore (not until ch. 2 & 3), language, flaming exploding things (ch. 3)
Summary: After the loss of a hopeless war Prussia finds himself alone, sealed away in Moscow. During one of many instances left in the melancholy to ponder his fate, he receives a very unexpected visitor. What fallows is their conversation.
Disclaimer: Hetalia belongs to Hima sensei, I do not own it. Also, this is just a story I wrote for stories sake, I do not mean to offend anyone. It contains Villainous!Russia and Villainous!North Korea. I'm not in any way trying to say I personally dislike any people or characters.

The organizers of Otakon announced on Monday that the convention will host director Bob Shirohata and Japanese voice actor Akira Sasanuma as guests of honor during the July 29-31 event in Baltimore.

Can be found here: pickledradishscans.blogspot.com/2011/07/problem-child_11.html
Collapse