Title: Hunter
Author/Artist: Me!
Character(s) or Pairing(s): Germany, France, Prussia, Liechtenstein
Rating: T
Warnings: None for now.
Disclaimer: I own nothing.
Summary: Gilbert is a hunter of mythical creatures as his father and his father before him. The most highest in demands are the elves which are the hardest to find let alone capture. One night after setting a trap with his friends he is able to capture an elf.

Title: Ghost
Author/Artist: Me!
Character(s) or Pairing(s): North Italy, South Italy, Rome, Germany
Rating: T
Warnings: None.
Disclaimer: I own nothing.
Summary: After his family moved to a new town and a new house Feliciano soon realizes that he and his family aren't alone in the house. There is also a little boy.

Title: On the Other Side of the Pillow

Warnings: use of sedative

Summary: Prussia is ashamed of his feelings for Germany and hides them. He doesn't know that Germany is trapped in an even worse snare. He remains clueless about Germany's nightly visits to his bedroom and that he is being molested. (story taking place before the Austro-Prussian War)

Title: you're still a young man
Character: Holy Roman Empire
Rating: I guess PG for certain song themes?
Notes: A small FST about Holy Roman Empire. Contains instrumentals and one song in German. Artists include Tower of Power, Frankie Valli and the Four Seasons, Beirut and The Decemberists. 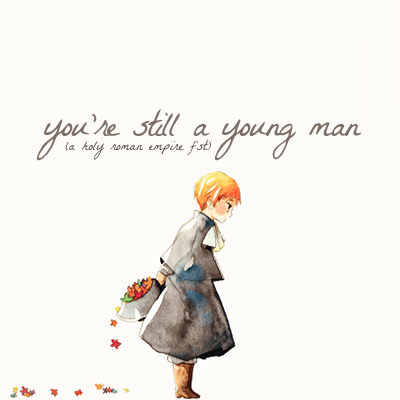 In this chapter: Pilot!America! Moose (or is it mooses?)!  ...and sort of pilot!Romano?

LET ME GET BACK INTO CANONLAND. These three ficlets are just fragments from a (MUCH) larger story I'm doing for the era right after World War 2 up until the fall of the Berlin Wall, and a bit past that because that's just not the end of the story. I'm writing this for my biffle Kajuju and our secret Germany/Prussia OTP I mean what. But since that's not everybody's thing, I assure all that there will be other pairings and angst and fluff and OCs galore to make it all fun and cool and worthwhile. Etc. I hope you enjoy these samples!

( Raising your voice, trying to stop an echo )

Click on photo to be taken to the sales page.

Title : By Their Proper Names
Characters : Prussia/Austria, Germany, Hungary
Genre : Drama, slice-o-life, fluff, how to make yourself at home in somebody else's basement
Rating : So very G
Word Count : ~5500
Summary : The Cold War is over, the Wall has fallen, Prussia is dissolved and Gilbert expects to die eventually. Until then, what else is an ex-nation supposed to do while he's waiting for death? Go pester the neighbour who always hates you and whom you always hate, of course.

(Kink meme de-anoning for this prompt : Prussia never stopped being the representation of the Teutonic Knights. Partially rewritten for better readability.)

I'm moving so I've reduced a ton of the prices, selling lots of doujinshi and goods(including a Denmark Strap), added lots of items including 5 doujinshi! Prices start at 25 CENTS. Please take a look if interested!

I have a Poland strap available for pre-order for 8 USD shipped if anyone is interested over HERE.

Summary:Being tangled in the mess of Arthur's ex-boyfriend and Ivan's blackmailing, Kiku finds himself doubting his own heart in loving another after his possessiveness changed everything in the past. What will he do when Alfred asks for Arthur to come back?

Arthur looked at Kiku, who was currently spacing out. They were in the middle of sharing their ideas for their group work, and it was Kiku's turn to share his.

"Kiku, are you listening?" Arthur called out to him. He was slightly worried, for Kiku was usually very attentive to everything they said.

Brand-manager Char just posted this on her tumblr!

The rainbow grows closer to completion. <3

Welcome to the World Bookstore!

Located in a small city just outside of London, England, the World Bookstore is known worldwide for various reasons. Firstly, because it is the largest bookstore in the world. Secondly, because it employs people from nations all over the world which means that anyone entering can be greeted in their native language. And lastly, because of the two fires that nearly destroyed the store in the last ten years. But most people don't talk about that last one.

So, basically, the setting of this roleplay is a bookstore. Each character is an employee of this bookstore and all have come for their own reasons - be it because they love books or because they really needed the cash. The characters will be able to play either in the bookstore, or in the areas surrounding the bookstore. Or, heck, anywhere in the world, really, but then you wouldn't have everyone else to play off of.

This roleplay will take place on the social networking site known as Plurk. Each character will have their own Plurk user account with which they can post their daily routines or reply to other characters' posts.

So come on in, fill out an application, and maybe you'll be hired to work at the world-renowned World Bookstore.

We are a brand-new roleplay so there are a lot of characters still open!