My 500GB+ piece-of-shit external hard drive broke, and I lost every bit of anime, manga, music, pictures, fanfic, etc I have. I've been (slowly) re-downloading/finding/saving anything I can lay my greedy little hands on, but I'm having some problems finding the old Hetalia wallpapers & cell phone wallpapers. Does anybody have a link, or is there a generous, kind soul whom I will worship and present with virtual chocolate-chunk cookies forever and ever willing to upload them for me?

Title: Sticks and Stones
Author/Artist: me
Character(s) or Pairing(s): DenmarkxNorway
Rating: PG
Warnings: some blood
Summary: Denmark comes to Norway after he's been in a fight, expecting Norway to patch him up. Norway isn't as displeased about this as he pretends to be. 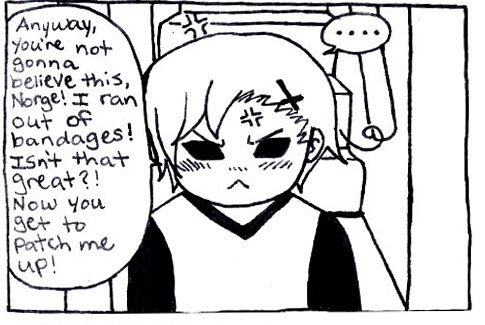 ( You are about to view content that may only be appropriate for adults. )

Title: Just in Time for Valentine's Day, part 26 - Rome, Germania and Ancient Greece
Author: me
Characters: Ensemble. In This Part: Japan, Korea, Turkey, China, Greece, Germany, Switzerland, Iceland, Finland, Estonia, Cuba, Hungary, Prussia, Austria, Lithuania, Egypt, Roman Empire, Germania, Ancient Greece
Pairings: Shh, it's a secret...
Rating: T
Warnings: Overflowing crack with a plot, mild violence, major bad language, general weirdness, sexual references and things beyond references, lots of kissing, a perverted Greek god and lots of perverted nations.
Summary: Kink-Meme de-anon at your service: Story previously known by the name: "Guys, Greece is Never Holding This Conference Again. Ever." Whole Story: It's the 13th of February 2010, the place is Athens, Greece, and the nations are peacefully having their Pre-Valentine-Conference. Or they should be: because this time, only one certain god can know what will happen next. If even he.
This Part: Everything has to end. But it can also begin again. Norway's trolls might have something to do with this...

or read from the beginning --> part 1

o 0 o )/ I recently joined a little Hetalia RP group and decided to play Japan. I couldn't resist drawing the scene of Japan browsing the web while huddled under his kotatsu. /o/

artist: me
rating: for everyone
summary: japan, his kotatsu, and his pets. and a laptop. simple b/w

The RP is still new and looking for characters over here.

Title: The Curious Sealand
Author: Icelilly
Genre: Comedy
Rating: PG-13
Pairings/Characters: All 5 Nordics + Sealand. Mentions of America, Estonia, Latvia, Russia and Belarus. Contains SuFin.
Warnings: Pure crack. Contains sex talk. Minor slash, violence and language.
Disclaimer: Hetalia isn't mine. But this fic is.
Summary: Sweden and Finland recently returned from a trip to Hawaii and invited the other Nordics for a quick get-together. Meanwhile, Sealand is determined to find the meaning of a word he just learned. But why won't anyone tell him what it means?

I accept paypal. All prices include shipping within the USA. If you are international add $1.50.

(To the Stuff!)
Collapse