Hello everyone! I'm studying abroad in Japan next Spring, so I've decided to part with some doujinshi to fund the trip. Please do take a look! ^^

Notes: Filled for the Hetalia Kink Meme. Original request: "Russia/fem!Prussia - Dark historical regarding the issue of mass rape in eastern Germany by the Soviet Union."

Yes, I'm aware the prompt is controversial. This story does not use the tragedies experienced by either side as a platform for smut or demonisation of neither the Allies nor the Axis. No sexual act, by extension rape, is included in this story though there is violence and assault. I've done as much in-depth research as possible to write this story as an exploration of fem!Prussia's personality and her progression from an empire into an independent Soviet satellite.

That being said, amongst the socio-economic issues I have included in this story have to do with mass rape, the forestalling of women's rights amongst the German communist parties, forced labour and German-Soviet confrontations. There are also a number of suppressive acts by German leaders that are mentioned with regards to ignoring the collective trauma experienced by German civilians in order to improve German-Soviet relations on a political and legislative level.

Summary: England confessed his feelings for America but was rejected by him

Notes/Warnings: This is a songfic based on the song of the band “Band Of Horses” and grammar mistakes.

Hey all! I still have a few posters available in the group buy! There is also a 4th box pending. I haven't decided whether or not to order it yet (I still have a lot of France and Italy posters from the first few sets available), but if more people are interested, I'll definitely order a 4th.

I was on my tumblr ealier in the year, and I saw this post Nevermind! It turns out it came from this image page http://www.pixiv.net/member_illust.php?mode=manga&illust_id=21239722 /it was fanmade
Thank you all for answering me so quickly! And have a great day. ^^

I ship from the US and do international shipping (Saturday only). 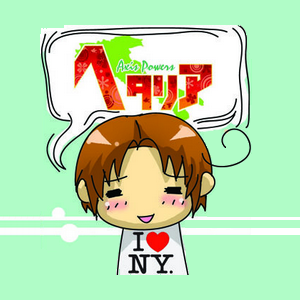 Hey, Hetalians! If you're part of the NYC Hetalia Friendlies and you'll be at NYCC/NYAF next month, we're having a meetup and photoshoot-type-deal that Saturday, October 15 at 1 PM.

We'll be meeting at the statue of Senator Javits (the guy in the chair) on the main floor of the Javits Center at 1:00, and move to a better photo location once we get a crowd going. You'll be able to meet the people who are running Hetalia Day -- there'll be a post about that next week -- and all that fun junk, too. Hope to see you there!

And if you're not already a member of the NYC Friendlies and you're in the NYC metro area, feel free to join our Facebook group and stay up-to-date with all our local events. ♥ Be sure to have your messages open to strangers so we can find out who you are!

Title: The Exchange Student
Characters/Pairings: America, England, Denmark, Prussia, Canada [this chapter], eventual USUK
Rating: T
Warnings: Genderbend, some OC's, Yuri, Swearing, High School AU
Summary: Alice Kirkland has an eventful year ahead of her; heading to America, having to adjust to a new school, a new family and...falling for her loud, obnoxious host sister? Well, she never anticipated that.

Fake Cut to Chapter One

Hetalia and Nyotalia doujinshi for sale! Click for sample images and description

Title: America's hat
Artist: Me~
Rating: PG(?)
Characters: US, Canada and Kumajirou
Notes: America attempting to wear Canada like a hat... I guess..

Title: Our Secret Place
Artist: Me
Characters/Pairings/: Germany + Italy
Rating/Warning: None
Summary: Lud and Feli in some fancy randomy archy place..maybe somewhere in Italy. i dunno.

Title : Five Times Captain America Met his Country and One Time he Didn't
Genre : humor, some angst, fluff
Pairings: USUK, Steve/Peggy
Rating: PG-15
Warnings: language, references to character death, spoilers for Captain America: The First Avenger
Summary: Steve Rogers, otherwise known as Captain America, is trying to adjust to living in the 21st century.  This is further complicated by finding out nations exist as living beings and America is a bit of a fan-boy regarding him.
Note:  I have been wanting to write an Captain America/Hetalia crossover for two months.  And I have finally done so XD.  It's in the 5 times plus 1 format and it got a bit long so it's split into two parts.  Please be aware, I do not follow comics at all so any references or information referenced in this story are from the  Marvel movies alone.  I hope you all enjoy, comments are love!
Disclaimer: I own neither Hetalia: Axis Powers or Captain America: The First Avenger, their respective owners do and I'm only borrowing them for a bit.

bloodandpepper
Character: Russia
Warnings: none
Medium: Pencils
Time: a day or something
©: I own my pencils. Nothing more. Nothing less.

A/N: doodle of doom. I used these snippets as tags in various books I'm reading atm.

Once again, not one even cut line, but I'm pretty much okay with it.