Does anyone have any new Gerita Doujin? I've read everything that has been posted on this......and I am dying from lack of anything new ;~;

comptine
Rating: M
Genre: Romance/Drama
Warnings: sex later on
Summary:
In Arthur’s closet, tucked away in the back, next to his stash of
cigarettes and whiskey, there are two things. One is an album of
pictures he wished was empty and the other was of a leather jacket he swore to never keep. usuk/frukAU
Note: In which Arthur faces the truth.

A skit my sister and I wrote. I figured I'd advertise it here.
awaaah the thinks I do when I'm bored.

Title: frost still frozen
Author: cieland
Rating: G
Genre: Romance
Warnings: Hypothermia?
( Collapse )There was a boy made of ice in the middle of the wilderness.

Eyes open, glazed over, hands whiter than the snow he lay in, tapered fingers glued together with hoarfrost. Staring unseeingly into the snow-driven sky, he froze.

The snow fell, it blanketed him, camouflaging him in the vastness of the winter in which he laid—so still that he could have been dying. He lay till he was invisible. Till he could not melt.

And the boy made of winter remained frozen.

There was a little girl filled with sunlight, wading through the snow.

Every exhale misting in the sharpness of the cold, hood hiding golden hair, eyes the colour of summer breath—searching for someone they could not see. Calling his name into the depths of the winter, she was not heard.

With one hand, so warm, so different from the frostbitten air, she parted the snow, away from the form of a boy waiting for an impossible spring. It obeyed her command, shying away from the boy’s body, melting at her fingers.

Gently, as to ensure that the boy made of ice would not shatter at her touch, she blew the snow away from his face, so that his eyes—so glazed with frost they did not appear real—stared up at her, unseeing, dulled, dead.

And the girl made of summer leaned down, so warm and bright she seemed like summer, and she kissed the boy dead of frost, kissed him so softly upon his lips—carved of ice, hers of sunshine. And in her hands, the boy thawed, succumbed to the spring she carried in her heart. Frosted eyes closing, he came alive under her fingers, melting in the warmth she gave to him.

A boy and a girl held hands in the cold, one made of summer, the other of winter coming to spring.

They held hands in the frost still frozen.

Title: The Book of Hoyle
Pairings/Characters: USUK, GerIta, Spamano, SuFin, AusHun/ China, France, Liechtenstein, Switzerland, Germany, Italy, Japan, and many others
Rating: PG
Warnings: None
Summary: In the world of Hoyle there are many tales, but none as strange as the Kingdom of Spades.
This chapter: The Royal Coronation Ball.

"It is time to meet your people." 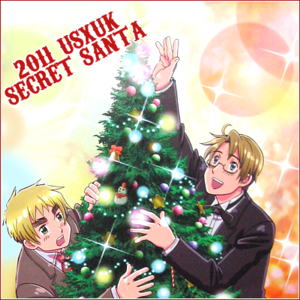 Just to let you all know, we're doing a Secret Santa fic and art exchange over at

usxuk for the holidays. This is the third year we've done it, and the previous years were a great success. We'd definitely love to see any of you to come over and participate. Signups end on 10/20, and assignments will go out by 11/01.

You can check out more information and sign up HERE!

We hope to see you all there!

Title- Stand Up Sit Down
Rating/Warning- K+, student/teacher relationship, genderbending, GakuHeta
Pairing- Spain/Austria
Summary- Rodreich was not an irresponsible person. It's just that Senor Carriedo was.
"Well, that was unexpected."
Title- Temptress
Rating/Warning- T, prostitution, sexual innuendos, genderbending, human!AU
Pairing- Germany/Fem!France
Summary- After the annexing of France, Ludwig is forced taking a break from soldier work.
Not that Ludwig would ever insult the Fuheir, but suddenly annexing this strange 'country of love' seemed like a bad idea, Treaty of Versailles or not

So I was directed by a friend to try and sell something here? I have the first two volumes of the Hetalia comics in japanese. I got them at a con back in 2009 and kept them in perfect condition until then. They both have those little removable things on them. Uh, I'm not really sure what to charge for them?? Honestly, I didn't think they would sell since they already got translated but it's worth a shot. I'll only accept paypal!! So whoever's interested send an offer and what not!

Title: all of these things have something in common
Artist:

I hope these types of posts are allowed.