Currently hosting a HUGE Group Order! 5 Shops to order from!

All pages have different notes so please be careful when you order!
Former participants will be getting a 10% discount on commission fee :)

Due date for all Orders is November 6th!

I accept Paypal only.
Negotiation is accepted only when purchased multiple items and in a reasonable line Home // Rules // Character List // Application Template
The year is 2123.
As the years passed, society began to change completely. Individual governments that ran their own nations were removed. In place of this, a relatively small group took power of the entire world. The Elite, they call themselves. The Elite create the laws, and the people are expected to uphold the law. One cannot break the law. It doesn't happen. At least, it isn't meant to.

There is a secret group, simply known as the Police, that blends in with society. They keep watch on the ordinary people, making sure the laws are not broken. If they catch someone breaking the law, that person is 'removed'. When a person is removed, their entire life is erased. Their family, friends, co-workers, everyone forgets their existence. And thus, no laws were ever broken.

The Police are secret because there is not supposed to be any criminal justice. Crime doesn't exist in a perfect society. The ordinary people are unaware that they are being watched at all times. They live without worries. That is, except for a few who have figured out that the Police exist. They are known as the Aware.

These groups of people exist all over the world. New York City is one of the most populated cities in the world, though it is no longer what it once was. It is pristine, safe, perfect. The amount of money that a person makes depends on the size of their family. Everyone is meant to make an equal amount. No one is poor, no one is rich.

Everyone lives in a picture perfect world.

Inspired by the novel 1984 by George Orwell.

Title: Party On The Rocks
Compiled by:

I know it's probably kind of late, but I was wondering about this Hetalia Cardverse... I've only seen the art and haven't really looked into it until now, but is there a site with... "official" information about it?

Warnings: some rasism in later chapters.

Summary: America finds him self in the south during the Civil war. having no clue what to do he just rolls with the events. he soon discovers the horror that is slavery. America is torn mentally down the Mason–Dixon Line. How will he escape?

"America felt a pounding in his head. He had been getting a lot of those lately. It might be because of the stress. The north and south had been fighting a lot. He didn't know what to do" salientia
Rating: PG for this chapter; R for the whole fic
Characters & Pairings: England/France, America; mentions of Japan, Russia and Spain
Warnings: In this chapter, close kissing. In the whole fic, language, sex, and some blood.
Notes: De-anon from the kink meme; originally written for this prompt. Cleaned up and slightly altered since the original version. Fake cut. Cross-posted to

( “I like not being at war,” he declares abruptly. “We should try doing it more often.” )

Title: Smile
Summary: What choice is better, which sin is worse, and why is there a Spanish man sitting outside his window? "Come here into my arms, 'the darkness over there is bitter'. You'll smile a little, 'the darkness over here is sweet'." Spain/Romano Vampire oneshot
Characters: Spain, Romano
Pairing: Spamano
Rating: M

Title: The Book of Hoyle
Pairings/Characters: USUK, GerIta, Spamano, SuFin, AusHun/ China, France, Liechtenstein, Switzerland, Germany, Italy, Japan, and many others
Rating: PG
Warnings: None
Summary: In the world of Hoyle there are many tales, but none as strange as the Kingdom of Spades.
This chapter: The new Monarchy moves into their new castle, and a storm begins to brew.

Alfred was touched, if not a little amazed, that his father had inspired someone that didn't even live in the same kingdom as him. 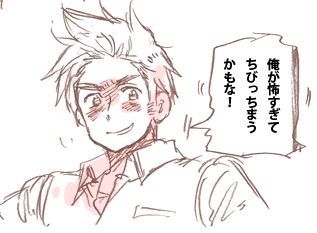 Sadly I'm in need of some cash and decided to part with some of my Hetalia things.

Prussia Plush, One Coins, and more" @ my journal
Collapse