Okay, I'm putting it out there, strangely, I manage to find myself consistently supporting certain hetero (albeit somewhat cracky) couples. A random fanfiction a long time ago brought me this new pairing: Belarus x Switzerland.

It make sense, I mean we got Switzie's trigger happer personality coupled with Belarus' knife tendencies? Granted, I don't think Belarus will ever look away from Russia but, meh. My head-canon wins out. XD

Does anyone recall the name of a fanfiction on lovely old Fanfiction.Net about Belarus and Liechtenstein switching bodies and essentially causing hell-on-earth for a number of people? It was a fun little read that I had unwittingly lost the title of. I can't seem to find it..... DX

Hello everyone!
I just came back from Anime USA, where I once again presented my "Hetalia, Learn to Laugh at Yourself or We'll Do it for You" panel. Had a full house again, and the attendees there were terrific.

I haven't used LJ in ages, but many attendees mentioned the Hetalia LJ community during the panel so I thought I'd drop in and check it out. You guys sound awesome.

My name's J-F and I cosplay my own OC of Quebec. You might have seen me with a shovel strapped to my back and a hockey stick for my flag pole.

Looking forward to cool discussions here and more installments of my panel and Hetalia stand-up comedy in the future. Looks like Katsucon has good odds of featuring either or both.

Hey guys I thought I could share the link to a new FUNimation video relating to hetalia (mostly Prussia's voice actor)     Yay! I finally got it to work ^_^

If you have any question - feel free to write! 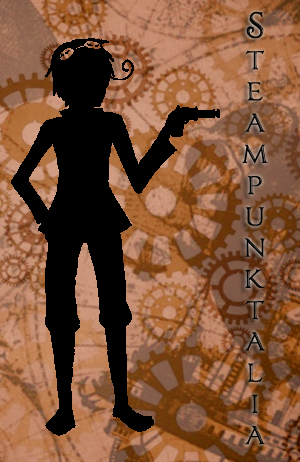 It's 1885 in London, England, and surrounding the everyday peoples are amazing technologies, all steam driven! It is a time of wonder and oppurtunity. Never before has the common man had such access to the world. Flying ships, jetpacks, even scooters that hover off the ground! Travel has never been simpler or more efficient! However, not all things are good in Londontown. Pirates and criminals walk the streets and crime rates are high. Many times the commoner will arrive home to find that their wallet inexplicably has been emptied and they no longer have a single pound to their name!

Steampunktalia is a twitter-based AU roleplay. All of the actual roleplaying takes place on twitter and all the other stuff like applications and updates happen on Livejournal. If you're unfamiliar with Twitter, the other members of the community will be glad to help you out. Since twitter only requires short updates of 140 characters or less, this community is great for new roleplayers or for those who have trouble writing long replies like in forum based roleplays.

The World went downhill; the Apocalypse is here. Due to Overpopulation, there's not enough resources to save everyone. Only a few people can survive and hopefully rebuild civilization. A couple (plus their close family, such as siblings) from each nations were chosen to represent said nation, based on their beliefs, attitude and likings, supposedly close to the national spirit/ideal citizen.
These people were put to sleep in a specific bunker, where they were taken care of by Machines. Once the Apocalypse was over and the world a place where living was possible again, the door automatically opened and woke them up; Out they could discover a real utopia, a perfect, untouched world where they can give humanity a second chance.
All you have to start your journey are a few resources, your knowledge, and a few other people; will you rebuild humanity as it was, with different nations ? Create a new one keeping all the good points? Or start a war to take control of this new world?

This is brand new so a lot of characters are still available!

Another clip preview of the English dub of "Hetalia: Paint it, White!" from FUNimation that is coming out tomorrow!
( Collapse )
Like a year ago (I'm not very sure about that), I read a fanfic about the Spanish Repression after the Civil War that I liked a lot. It was pretty long and angsty, and the story had some time loops in the narration. The thing I most remember was that it started with Spain in a car with a family and he left with the little girl, named Celia; at the end Spain was with Romano in front of Celia's family tomb. In between it had some interaction with Spain and America.

If anyone know which fic I'm talking about and could send me the link I would be grateful... I want to read it again and thank the writer. And if I'm not allowed to post this, I'll deleted it as soon as I can. Thanks in advance.

Hi, this is the first time I've posted on LJ (though I've been prowling for a while ^^) and I was wondering if anyone knew any good Fem!AmericaxRussia fanfics? It's my favorite pairing <3

Title: Out of the Shadows
Characters: America, England, Canada, Australia, a bit of Russia
Rating: I'd say probably a pg-13, might go higher later on though
Warnings: language, violence, creepy and disturbing (hopefully) imagery... this chapter... definitely some violence
Summary: America takes a dare to stay overnight in a haunted house, but when fear is all that remains what's left to keep the shadows at bay?

Pain etched itself across the child's face.
Collapse