Please do tell me what you think! <3

Title: There’s a Reason for Everything, but a Zombie Apocalypse …
Rating: PG-13ish (for now)
Characters: England, France, America, Japan, Canada, Prussia, Netherlands, Italy, Germany, Spain, Romano, Russia, China, Poland, Lithuania, Norway, Iceland, Denmark, Sweden, Finland, Korea, Hong Kong, Switzerland, Austria, Hungry, pretty much the whole ensemble will appear at point or another
Pairings: FrUK, Ameripan, GerIta, RuCho, LietPol, AusHun, SuFin, DeNor,
Canada x Netherlands x Prussia, Korea x Iceland, Switzerland x Hong Kong, and numerous side parings
Warnings: AU, Stupidity, Human names used
Genre: attempted horror, humor, romance, and crack.
Summary: There was this one night, where my brother’s were drunk and decided to become psychiatrists. At least the only advice they gave the entire night was “Everything happens for a reason”. Well, that or “Not to do anything or else or our donkey will be charged with high treason”, but let’s focus on the first one, yeah? Since it was actually good advice. It did stick in my head. Everything happens for a reason. Like Alfred, I don’t know why he happened, but it was for a reason. Then I realized, just because things happen for a reason (like Alfred), doesn’t mean it’s a good reason (like Alfred). For example, how about a zombie apocalypse? What the hell kind of a good-shit reason is there to have one of those? What messed up fucker caused this to happen? Probably Alfred.
Notes: Nils - Norway, Matthias – Denmark, Leon – Hong Kong, Morgens – Netherlands, Emil – Iceland, Anneliese - Liechtenstein (full AN at the end)

Disclaimer: I think we all know the answer =.=

Hi guys! I'm selling my Canada and France My Little Ponies as well as taking commissions.

Selling some Hetalia-related things over in my journal, most of which is made up of official books and doujinshi.

Chibi-san Date, Himaruya's other series, also has its latest chapter released. Check it out over here.

Title: Deep Inside
Author/Artist: pourisetti
Character(s)/Pairing(s): usuk
Rating: none but idk....
Warnings: please just tell me if this vid is understandable or not, I used my own art and other fanarts for this video, mine are those where arts are lacking patience cause I'm an impatient person...

here at my page Home // Rules // Character List // Application Template
The year is 2123.
As the years passed, society began to change completely. Individual governments that ran their own nations were removed. In place of this, a relatively small group took power of the entire world. The Elite, they call themselves. The Elite create the laws, and the people are expected to uphold the law. One cannot break the law. It doesn't happen. At least, it isn't meant to.There is a secret group, simply known as the Police, that blends in with society. They keep watch on the ordinary people, making sure the laws are not broken. If they catch someone breaking the law, that person is 'removed'. When a person is removed, their entire life is erased. Their family, friends, co-workers, everyone forgets their existence. And thus, no laws were ever broken.The Police are secret because there is not supposed to be any criminal justice. Crime doesn't exist in a perfect society. The ordinary people are unaware that they are being watched at all times. They live without worries. That is, except for a few who have figured out that the Police exist. They are known as the Aware.These groups of people exist all over the world. New York City is one of the most populated cities in the world, though it is no longer what it once was. It is pristine, safe, perfect. The amount of money that a person makes depends on the size of their family. Everyone is meant to make an equal amount. No one is poor, no one is rich.
Everyone lives in a picture perfect world.
Inspired by the novel 1984 by George Orwell.

Still lots of stuff available, lowered the prices(doujins start at .75 and merch at .25 cents) and added some items I forgot to add(including an America Oyasumi Coaster). Lots of America and England goodies are available including official posters, sheep coasters and plushies! Lots of other stuff too though including official Rubber straps(China and Hungary), prints etc. Please come take a look if interested and thank-you if you have purchased from me! All packages that have been paid for will be shipped Monday!

Title: Hell’s Kitchen, Hetalia-style
Character(s): Germany, Spain, England, Sweden and Switzerland
Rating/Genre: G / Humour
Warnings: Human names, script-style narration, and crack, so much crack. Oh and England’s scones. Again. Le horror.
Notes: Written in twenty minutes on a whim and based on a random prompt given by a friend.
Disclaimer: Proceed with caution for I bear no responsibility for what happens next.


"It's all about doing it like a REAL MAN. And since I can't help but pity you poor, uneducated sods, I'll have to show you how it's really done. Let me make you all some lovely scones." 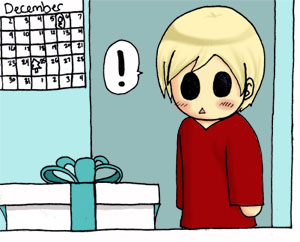 Notes: A psychological horror about how the Berlin Wall manifests itself in other ways in the psyche of a Nation. Part of a fem!Prussia history arc where she was always female and all other nations retain their original genders.

Title: A Rush of Blood to the Head

Summary: Gilbert realizes he's never questioned the completely unanticipated fealty he holds for the Russian who (predictably) refuses to leave his side. He figures, however, some questions are best left ignored. Ficlet.

[ We were born and raised in that summer haze. ]

and my feedback here
Collapse