Hogwarts, School of Witchcraft and Wizardry, has decided to start an exchange student program with other schools. ( Collapse )

Very cheap commissions are being offered by several people on Deviant Art to keep a child out of the hands of his abusive father.  They need $15,000 Canadian to cover the court costs.  If you are interested in donating your time as someone offering commissions for it, or would like to get information about the commissions you can get, then please read after the cut.  There will be examples of each person's Hetalia related works as well.

EDIT: Link fixed.  That was a link that was meant for just Phynix showing what I was asking at a con we both attend.  My apologies.

Summary: Dark!Germany/Dark!Italy. A darker story of Germany and Italy during WWII.

The latest blog post doodles and comics are now also located here. Himaruya has also added a new comic, including Denmark and Norway!

Here's the new chibi doodle, for a preview, in which Norway is Christmas shopping. Or something. The text beneath the comic says "Norwegian Butter Crisis!" so we're probably still on that topic! Is it hard to have Christmas without butter. . . ?
Translation and scanlation by 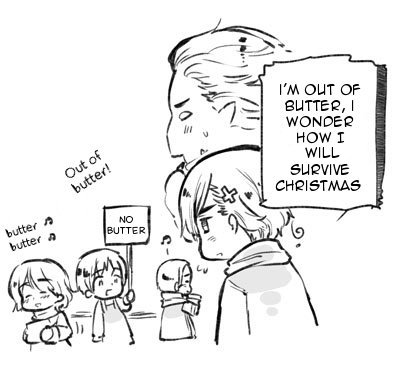 ( Collapse )
Hi, I'm new to livejournal, but I wanted to share something I made for Hetalia :).
Come see Russia Doll, da?
He's right here.

Title: Even a Miracle
Characters: America, England, Canada, France, Northern Italy, Hungary, Russia, General Winter, (cast might expand in later chapters... I'm still working on that)
Rating: K+
Warnings: Umm.... Christmas special level sap? Also, AU kind of...
Summary: The winter wizard has taken Santa hostage. It's up to a ragtag group, a kid, two toys, and the leader of Santa's guard, to save the day. Not really a parody, but perhaps an homage to a certain story involving a twister, ruby shoes, and a witch.

Title: Every Teardrop is a Waterfall.
Author: himarules
Pairing: Spain x Romano
Synopsis: Sometimes, it felt like he gazed into his very soul—though, he would not confess how marvelous it felt. One-Shot.
Rating: T: for minor cursing
Warnings: a mix of fluff and angst. Human and nation names used.
Author’s Note: This post includes both the Spanish and English links of the story. Hope you all enjoy!

Cada lágrima es una cascada
Every Teardrop is a Waterfall