Another blog update! This time it's China(going "Fumuu") and an answered question about how to go about capturing a mochi. Or maybe just Mochimerica specifically, since he only elaborated on him.

China is your preview, the rest and the text under the cut! 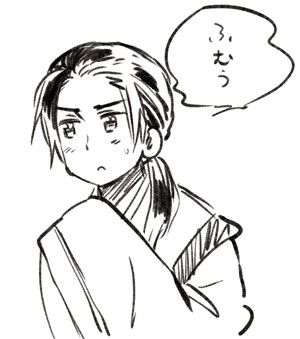 Title: Counting Scars
Parings: PrussiaAustria
Rating: K+
Genre: Hurt/Comfort
Warnings: None really, aside from the subject of war scars?
Summary: After a prank blows up in his face, Prussia finds out Austria's most
guarded secret, and the reason he dresses so modestly.

Title: Coup de Grâce
Characters: FACE ensemble. No pairings.
Genre: Crack
Rating: PG-13
Wordcount: 3230
Warnings: Language. Typical France being France. Lots and lots of punny/word-related jokes.
Summary: In which a party is planned following the end of the War in Europe, arguing ensues, and France's will to live is utterly destroyed.

"When other people didn’t shower or brush their hair for a week, then proceeded to walk around outside mostly naked, they were gross. When France did it, he was déshabillé."

Check it out here

Title: Never Land 2/? [FF.net link]
Genre: Fantasy/Romance
Rating: PG
Characters/Pairing: America/England, Greece/Japan, Belarus->Russia
Summary: Peter Pan!AU. When a boy who Arthur has always believed to be merely a character in his fairy tales flies in through his window the night before his eighteenth birthday, Arthur finds himself whisked away to a land of never growing up. [America/England]

Notes: Thank you for the comments so far, I hope everyone continues to enjoy this story!

Comments are filled with love and pixie dust~ ♥

Title: What Sweet Kids And Sensible Adults Don't Know
Author: marinoa
Rated: T (hardly even that)
Characters: Finland, Russia, America, England, France, mostly mentions of many others.
Summary: Not everything is what it may seem... The same goes for what we believe is the truth about Santa Claus and his Chirstmas elves.

( The Truth About Santa's secret Regime )

TITLE: Come Play With Me
AUTHOR:

natcat5
GENRE: Fluff
RATINGS/WARNINGS: G
SUMMARY: Arthur lets loose and Alfred pushes back his hatred of winter to have fun in the snow.
NOTES: Many thanks to beta reader

( Collapse )
I couldn't resist.
Have a safe, happy and generally Prussia-level-of-awesome holiday, everyone!
Come see the cookies =)

Hello everyone! Everything you see here is pre-loved, or in other words not brand new (except one item). But that also means DIRT CHEAP PRICES. There are a lot of good deals so please check it out! All are in good condition.