I was in China for 3 months and it really stifled my work ethic :c
There's doujins I need to translate but I've been distracted by Neopets (long story).

Title: A Glass of Wine
Artist: Me
Pairing: England/Japan
Rating: G
Warning: Alcohol use
Notes: I drew this for Selinawen for her birthday.

For those who play in the English TinierMe community, here's some news for you. 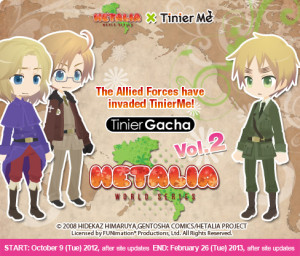 Starting from October 9th, and taking place until February 26th, the new TinierMe x Hetalia event! This time, it's based on the Allies (you may recall these outfits having showed up long ago for the Japanese community event). Even outfits like the Gakuen ones or the Paint it White! ones are included. Please note that these accessories are all paid, though.

I'm bringing to you two things today. One is the index of the Eastern Europe & Co Summer Santa Exchange. We had fanfic, fanart and a comic this time. Please have a look at the few but very neat entries, and maybe leave a short note of appreciation if you like it.

Secondly, that was the summer exchange, and that means... ta~daa~~~

The Secret Santa Exchange is focused on the wider so-called "Eastern Europe*" group from the series Axis Powers Hetalia. As such, fanworks with Russia, Belarus, Ukraine, Estonia, Latvia, Lithuania, Poland, Prussia, Hungary, Romania, Finland and Bulgaria as far as they are part of the group are the focus here.
*"Eastern Europe" as it is used in fandom to describe the group that commonly includes all Slavic and "Baltic" nations; as such it is broader than the actual definition, including also Southeastern, Nordic and Middle European nations.

If you're interested in participating, check out the rules and sign up post: On dreamwidth and on livejournal. You don't need to have DW or LJ to participate, though!


Here’s how it works: After you sign up, you’ll be assigned another participant to write a story/draw art for, following the prompts they’ve submitted. On December 1st through December 26th, you can start posting up what gift you are giving your Secret Santa, and someone in turn will post up a gift for you!
Collapse