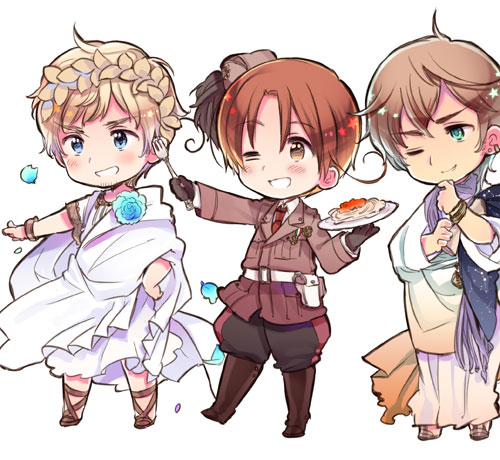 EDIT: Translation can be found here, done by

According to Tumblr, that Roman-looking dude we saw previously with Italy is Emperor Nero, who had made a brief appearance in this story.

Also, this was the source link I was given, but it's giving me an error message at the moment, and I haven't been able to track down the images by going to the main site. Since I can't read Japanese, I'm not really sure what's going on with that.

ETA: Tumblr user mochifever has some scanlations up already:
Page One
Page Two

As you know, Hetalia Day is a celebration that happens every year on the 25th of October.
By now, there's one month left until the 2014 edition. That's why we have decided to open this event now.
Hetalia Day Online
But first : what the aim of this event?
You might think it's super dumb to organize something like that since in many countries and cities people are organizing their own Hetalia Day. But hey, what about our hetalians friends that can't go or don't even have an event in their city or country? Or maybe, they're too shy to go!
It would be a shame if they can't celebrate with us, right?

That's why, well, more like, that's how this event came to life. To celebrate the Hetalia Day all over the world AND on the internet.

How does it work ?
Easy! Everyone can participate.
On the D-Day : you put whatever it is that you made for the Hetalia Day, drawings, videos, cosplay, etc. on facebook, twitter, tumblr, your own blog (you get the idea, right?) with a little message (like : HAPPY HETALIA DAY) and, of course this tag : #hetaliaday14online

It would be amazing to see a bunch of Hetalia related things everywhere, on every website, for the Hetalia Day.
Even if you're already participating in the event made in your city/country, you can participate online and spread the Hetalia love.

SO PLEASE.
Share this event as much as you can !

PS : In no way this event was made in competition to the actual Hetalia Day fanpage/website.
PPS : English is not my native language, so yeah, don't hesitate if you don't understand or find mistakes.
Collapse